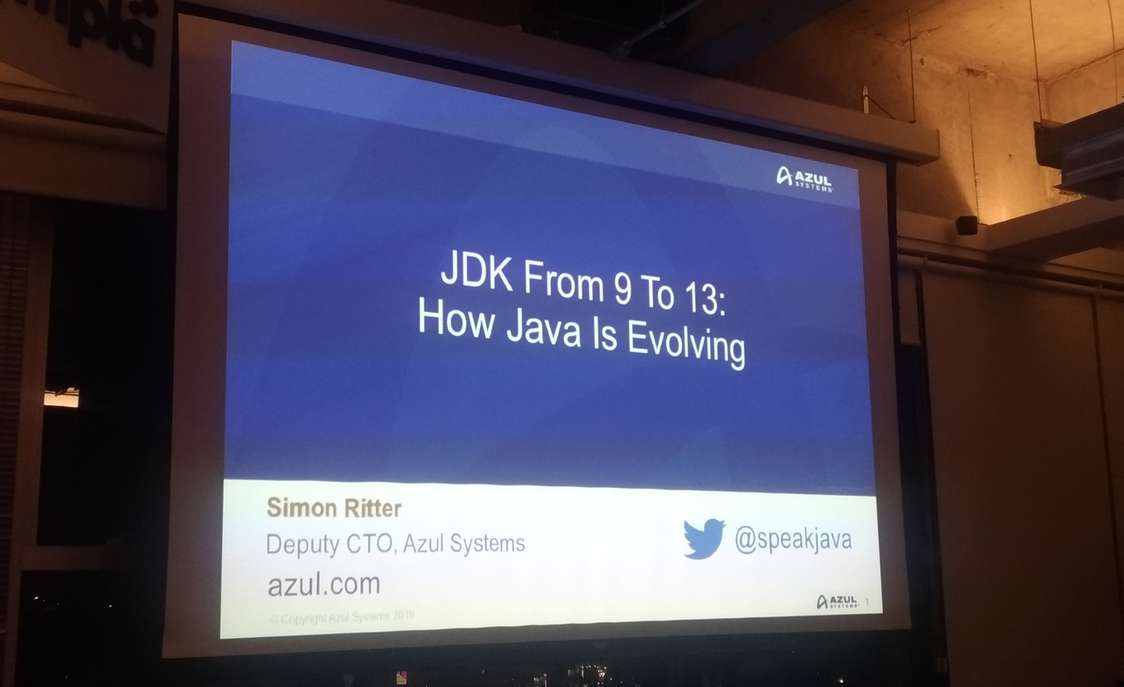 In this post I will share my notes on a great talk given by Simon Ritter titled “JDK from 9 to 13 How Java is Evolving with Simon Ritter”. Simon Ritter is Deputy CTO of Azul Systems and has been in the field for a long time. The talk was organized by the Java User Group Campinas and sponsored by Movile and Wavy company in Campinas city state of São Paulo, Brazil. The notes below summarize my understanding on the subject talked during the lecture, so let me know whether I made any misunderstanding.

Simon presented an overview of how java is evolving and the main changes since JDK 9 up to know. Java had been changing a lot its binary and the delivery strategy. The JDK 9 from 2 years ago was the last major release with the introduction of about 90 new features, JDK 9 and 10 were intermediate versions where Oracle started to clean upand remove deprecated features. Some of features included on JDK 9 are:

The new release model for delivery new versions on every 6 months brings more agility to the development and allow the adoption of new features fast. I will be very happy when cloud providers start to deliver new JDK versions as fast as JDK is released. The Long Term Support (LTS) for the JDK is now eligible every 3 years and the current LTS version is JDK 11, this means that Oracle will delivery fixes to JDK 11 until the next LTS release be launched.

The OpenJDK also had evolved to be align with JDK releases, so the OpenJDK 11 and JDK 11 now has the same features and the goals is that boths evolve together. One of the main differences between OpenJDK and JDK is regarding the license model, while JDK 11 and beyond is free only for development and testing environment and you have to pay a Oracle Java SE subscription to use it on production the OpenJDK uses a GPLv2 license with no restriction of use. The JDK 8 remain indefinitely free however without official updates like security patches and bug fixes.

The JDK 10 came with the introduction of cool new features like these one:

The JDK 11 is consider the start point for the new direction that Oracle gave to Java, some of the new features are:

The JDK 12 started as the first in the new model of deliver every 6 month and it came with nice features as well, a highlight to JEP 346 bellow:

The JDK 13 is coming and here are some features that are planned and cool projects already started:

At the end Simon present the Zulu JDK, a JDK made for his company as a solution for companies that want keep using JDK 8 and receive secure updates even after the Oracle stops do that.

It was a great talk, Simon mastered the subject and expose in a object way the main features introduced and how agility the evolving of Java will be in the next years. The model of delivery fast excited me because nice features can be introduced in JDK every 6 months while language become more fun to write and JVM more robust. I wish cloud providers can make this versions available as fast as oracle has released it. Other thing that make me happy was the ability of java to automatically return Java heap memory to the operating system when idle, this is an amazing feature. See my other post here Automatic Vertical Scaling of the Java Heap.